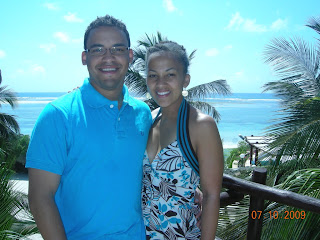 Before I begin let me just thank all our friends that contributed to our honeymoon package. We had the bests time of our lives. Here is the honeymoon adventure:

You would think that the weeks leading up to our honeymoon would have been a joyous time, but I was so stressed and confused as to where to go. I think part of me had my heart set on Canada, which made it so hard for me to think of anything else.

All our options for our honeymoon seemed to have dead ends. In the beginning we had chosen Zanzibar, only to find out that all the flights were fully booked. Then the agent tried to get us to Thailand which was also crazy. I could not believe it. So we went back to the drawing board and began plotting other destinations: Zimbabwe, adventure train to Tanzania, Zambia. The hunt was so bad that the day our honeymoon began we still didn’t have a destination. Avon had 2 weeks off of work and I was in such a frenzy to use it all up wisely.

The first weekend we packed our bags as if we were going for 2 week holiday and headed to Swaziland. We decided that what ever we do, we must get out of the city. Yup we decided to visit family! As much as it was good to get out of the city my heart was aching because this wasn’t how I pictured my honeymoon. I really started to pray and even began doubting that God actually had a plan for our honeymoon. I almost felt cursed and negative thoughts came to my mind like: “Kanya you don’t deserve a honeymoon, you don’t even have a full time job, you shouldn’t even be relaxing!” I was so sensitive and emotional about the situation that anything would make me cry.

Come Monday we drove back to Johannesburg checked our emails and found that our flight agent had managed to get us on a all inclusive deal to Mombassa, Kenya, for 7 nights. We were to fly out at 11am the next morning. It was so funny coz in our minds we had no real idea of where we were going. We had seen this resort online and thought it was way out of our price range and could only probably go there in our dreams. But his Magical Flight Centre lady…Sue from Fourways!!!! Managed to get us there.

The fear of the unknown was actually exiting. Getting on the plane with only a small print out on what flight we are on, no reference number nothing. We got to Nairobi at around 4pm and then were suppose to wait till 10pm for the next flight to Mombasa. However luck was on our side we managed to get onto the 6pm flight to Mombasa and I promise you if there was first class on this flight the lady would lhave put us on it. She was so nice. A personal driver was at the airport to pick us up “Mrs and Mrs Middleton……YEY that’s us” The driver was like “You are very lucky you came early or else we would have gotten to the hotel by 2am”…>Brrrrr Kanya, “what you mean the hotel isn’t close” Driver “Oh no we have to cross the Ferry” As he continued driving through the dusty rush hour traffic of Mombasa, as if a ferry was a normal thing to catch at late hours of the evening…..BRRRRRRR Avon and Kanya “Ferry?”

Yup the Ferry was an adventure. Avon and I could hardly see outside but there were just masses of people all rushing to somewhere. It made me think of how life here seemed so different. These people had to catch a ferry every day just to get to work. The ferry fitted about 10 cars and people just flooded the spaces between. As guys tried to sell us things as we floated across the dark warm waters of Mombasa, I thought wow who would have known this was what we would be doing. We managed to get to the hotel at 9pm just in time for dinner. 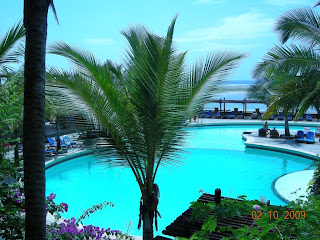 We couldn’t have asked for more. The resort just screamed HONEYMOON TIME! Our bedroom had a huge king sized bed which we could sleep on all angles on. The room was an ocean theme with a balcony, bar, TV, reading room. We had breakfast and Dinner catered for and the food was rich in flavor and full of goodness. Avon ate fish almost every night and I had never tasted such tasty vegetarian meals. 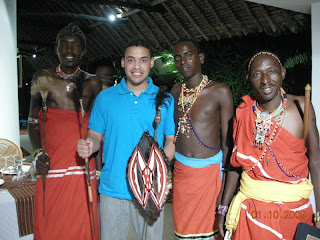 The air was so warm and the ocean even warmer (like a bath tub). I wanted to savor every moment we spent there.

Nights were full of all kinds of entertainment from tall massai tribes doing traditional dance to romantic singers. Some night we chose to be the entertainment by spontaneously standing up and dancing under the moonlight to some African Salsa rhythms. Knowing that we may be watched but being fully immersed in each other’s moves and loving energies. Other night we went full out and just jived doing funny dance moves we learnt from the movie “the Lyrics”…..it was like we were in our own humorous world, with out a fear or worry. I loved it.

We also took adventures too. After bargaining with jet skii deals we managed to hit the waters on a 1.5 hour personal tour. I held onto Avon for dear life, as the waves bounced below us. We could see the shore view with palm trees, running children and oversized hotels. The sun was so warm on my body and the warm salty ocean spray kept blinding me but the excitement kept me high. I thought to myself how great is our God, I had never seen the world from such an angle, never felt so vulnerable to the gushing waters that roared beneath me. …..hiding a world that was so foreign. I would scare myself and think what if a whale or shark was right below us this very instant. The world above me too seemed to have its own dimension, as a larg 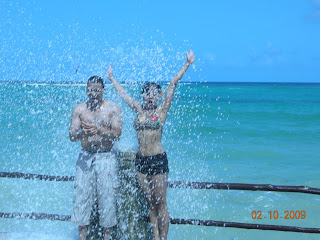 e flock of birds flew with us dipping down for water or insects Where did these birds come from, where were they going? The moment was so Godly I thought maybe 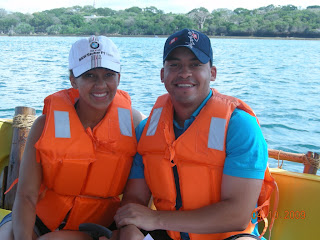 I should put in a prayer request…..wow God it would be so amazing to see dolphins….no pressure! I knew Avon longed for the same experience. I spent a moment in prayer and felt as if I could talk to the creaters of the earth. ” Helloooooo Dolphins my name is Kanya and we worship the same God….our creator, He brought me here to see you so please come and meet with me…..I am on honeymoon”
Not long after my mental chat with the universe ….dolphins huge ones surrounded us both. They swam along side of us as if we were friends. I could see them swimming below us moving elegantly yet scary as I thought what if they were sharks too. I can still picture their bodies. Avon was just as excited as I was and for that moment a tear came to my eye as I held Avon so close and felt a real deep connection. In my mind I said, “thank you, you have no idea what this means to me”…….if this was what God made me wait so long for…I accept. Wow Gods Love is amazing.

After seeing dolphins I felt like I had hit the climax of our holiday, but we had another major adventure ahead…Diving. Yup I decided to get out of my comfort zone and take a dive lol. I am not going to lie I was scared. 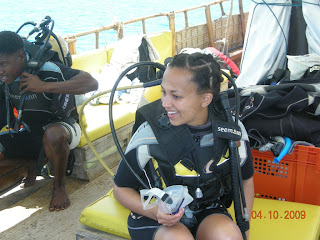 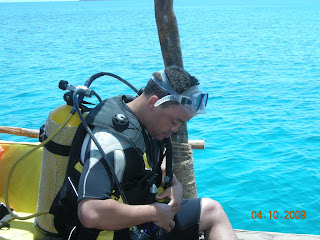 . I thought I was going to sink one time and was scared about forgetting all that I had learnt….Equalize (blow out your ears), breath through your mouth, remember the sign language, do this do that if water gets into your mask. There were moments when I did forget everything but as soon as I calmed down I was fine. Once we were down in the clear water, coral Marine Park I felt like one of the fish. But realised that I was probably like the bad Human from finding Nemo. I felt like laughing coz some fish would just stare at you while you are just starring at them and its like a stare down!. Other fishes would just go about their business as if you were not even there….”I get no respect!” We saw stingrays, eels, and poisonous devilfish. Snorkeling is nothing now
I would totally do it again. 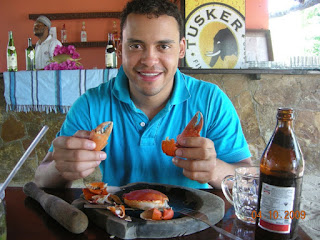 After our diving adventure they took us to Wasini Island for lunch. I had the most amazing Crab ever I ate one and a half crabs……chewing away. Only to find out that I am allergic to crab… I managed to get a huge rash from head to toe. It was the only damper of our honeymoon and I tried to enjoy the rest of the two days the best I could. However I couldn’t sit in the sun, swim or anything :(. Feeling sexy was even hard coz all I could see was my rough skin. But Avon was definitely made for me because for some reason he isn’t fazed by my rash or allergies he actually enjoys rubbing my arms, which is actually soothing for my eczema. Just to give you an idea of how bad the reaction was at the airport I set the flue heat detectors into “warning!”

We got back home a bit early, which was good coz we were able to relax before the busy week started. We had a picnic at Jozi botanical gardens. Which reminded me of my grandparents for some reason. It was defiantly their type of environment. And just hung out.