On my Dads 58th birthday we decided to tour the campus, which is where both my dad and I went to University. I know it may not seem like a big deal to most of you but walking those pathways with my father,  husband and two close university friends really brought a peace to my heart. It was like we were all in our own world of thoughts the past the present and the future.
The general walk though campus was interesting but my emotions hit me when I walked into the Environmental Studies building. As we walked passed old professor’s doors I thought of times when I thought I could never finish a course, assignment or quiz. I thought of the tears I shed as if it was the end of the world. Holly and I stood outside of our advisors door and saw ghost figures of ourselves sitting on the floor waiting for our professors comments and reviews for our thesis. And felt that chilling feeling of “ the never ending thesis.”  But here we were both two grown ladies with husbands a career and the anticipation of starting a family. Wow it just amazed me how life moves on.
If we were feeling these emotions and reflections and we only made it to the masters level, I could only imagine what my father was feeling 30 years after completing his PHD.  It was like he was taking a moment of appreciation of his “birth place.”  A moment o thought for that time before the full blown career, before the wife and children and adventures of adult hood. I couldn’t even fathom what it would feel like 30 years later and walking these corridors with . You really begin to think about the decisions you have made to be where you are today.
The real privilege of being enrolled in such an institution can sometimes hit people later on in life.  Dad said something so interesting “The students here have everything at their finger tips, all they need to do is study and apply.” It seemed so simple but yet I knew when I was there it was not so simple. Gosh thinking about it now makes me realise how we take it all for granted. At times our young hearts and mind get absorbed in things that don’t last. Do the students there know what they have? Do they really know the value of education?  Are they investing in relationships that last or are they holding on to broken ones?
I remembered the good relationships I made and still have today. It was like this campus created an environment for investment in friendships that would blossom. I think of Guillermo who could hardly speak English when I met him but we somehow managed to communicate. I used to tell him that I was going to to start a family coz I want 10 children. Ironic how the next time he sees me I am almost 8 months pregnant. Then there is Holly who stood by my side through out my masters…..would we have been friends if we hadn’t been in the deep end together? Only God knows.
Although there were moments of connection I also felt a sense of disconnectedness. There were so many new buildings that looked so IT like. It looked like an episode of transformers in 3D. These buildings didn’t know me…..I used to walk right across the grounds they were built on. It was like going to that home you grew up in all your life and seeing what people have done to the house…..as nice as the changes are there is still a strong part of you that wishes things would have just stayed the same. 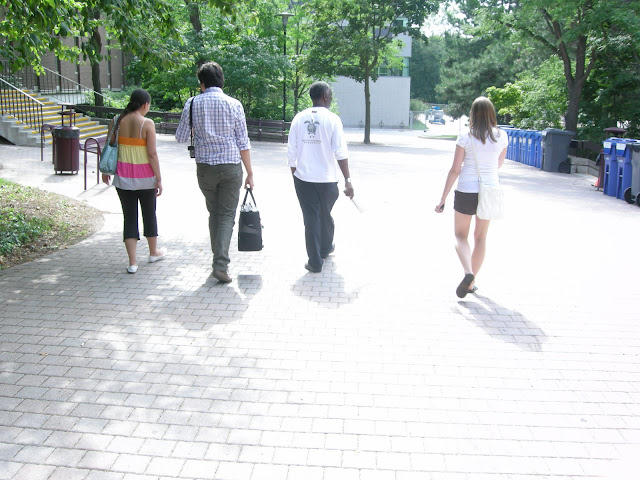 It really amazes me how life just goes on, people move on and even buildings move on, but deep down some of us just wish it were all so simple just like how we remembered it. Maybe I am an old fashion University of Waterloo Alumni.  or maybe I just grew up. Thank you UW :)!